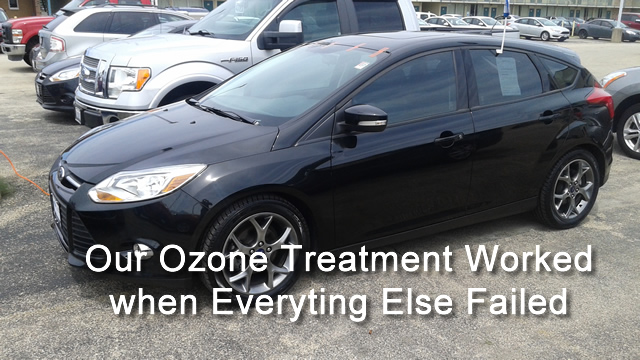 I just heard from one of our many service providers about the use of our ozone generator to deal with car odors.  The problem was heavy cigarette smoke in a car with leather seats.  Leather seats tend to be a worse issue because they are porous and breathe.  The smoke odor gets in them and doesn't want to come out.  The car in question was a 2014 Ford Focus that was in superb condition except for the smoke odor.  We know that there are a variety of approaches to car odors, and the least effective is trying to use a spray or odor bomb in the car.  The long-term effect of these treatments show us that they are not worth the money.

We always start with a wipe-down of all surfaces.  The odors are embedded, but also on the surface.  Before going after the embedded odors, we use a very good (and natural) solution to clean all surfaces.

Then, comes the ozone.  Two important misconceptions should be avoided.  First, do not pipe the ozone in from an outside ozone generator.  It is well-documented that humidity and heat will substantially reduce the ozone output.  While some continue to pipe in ozone from an outside unit, we prefer to place the unit in the car, turn on the AC and fan.  This literally clears out odors in about 45-60 minutes.

We follow with a misting of an essential oil mixture that also neutralizes odors.  This is not a fragrance product.  It is a neutralizing product that does leave a mild citrus blossom scent.

What car lot managers reports is the "Odor does not come back" with our system, and everything else has a short period before the odors emerge again.  This is particularly true when there is hot, humid weather and the car may be shut up for days.  For car lots seeking to maintain cars on their own, we suggest the Car Neutralizing Package that includes a 20,000 ozone generator that easily fits on the center console of the car, and the Odor Neutralizer liquid that can ber applied with a spray bottle set on misting.

Here is the other critical factor for any car detailer or car lot to understand.  Ozone generators must have the ozone plates replaced about once a year, and sooner with heavy use.  There are thousands of worn-out ozone and ionizing units gathering dust because they just aren't doing the job.  With out lifetime service warranty, we will rebuild your unit for a modest, fixed fee at any time.  So, you will always have a working system that does the job